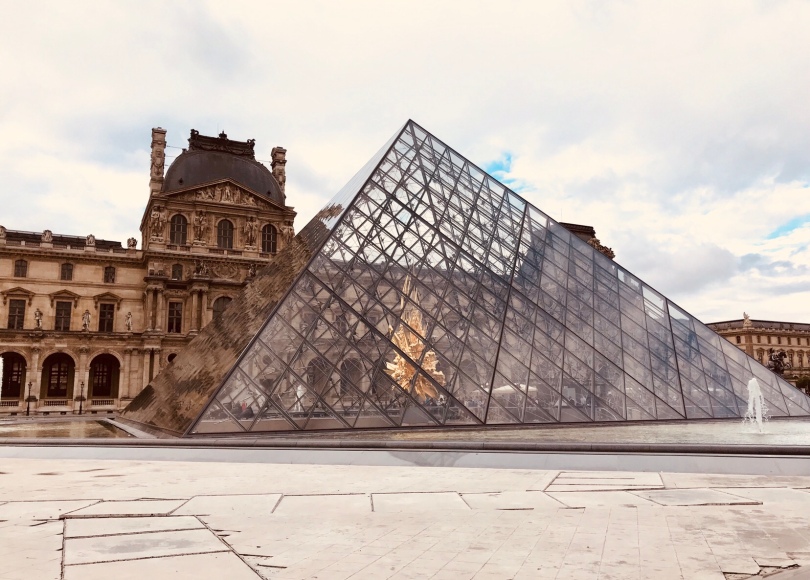 I never thought I would love Paris as much as I did. About two years ago I had a brief romance of a single day in Paris and knew I would have to come back to really experience the city.

First, I will never return to Paris in the summer. There were so many tourists that it was too miserable to actually go to museums, visit cathedrals, or anything interesting on the historical building aspects. I am fully committed to coming back to Paris during the off-season, even if the weather isn’t as lovely I will at least get to enjoy Versailles and enter the Louvre, walk down the esplanade near the Eiffel Tower…and things like that.

So what did I do on my whirlwind trip?

My flight landed at 5:20AM at CDG. Per the usual on international flights, I didn’t sleep. My secret to fighting jet lag is to not sleep until I am in the country I am off to at the proper time.

I’m going to start off by saying that going through customs in Paris was…interesting. The normal interaction with the officer at customs is the usual questions:

My interaction was…[hand over my passport]…officer takes my passport, finds a place to stamp and hands it back… yeah. So…lol…easiest experience through customs EVER I think I just look incredibly non-threatening. I was thrilled that my bag came out pretty quickly…so overall time from getting off the plane to grabbing my bag was an hour.

It took me a bit of finagling to understand which lines to catch to get to my hotel, but after catching the 6:52 RER C line hours I arrived at my hotel around 8:20AM.

I couldn’t check in until later so I spent some time walking around Paris. I honestly have no idea where I was going, but since I was there so early I decided to head to the Louvre since they open at 9…and then…I saw this…

I laughed and walked right on by. But I did take a lovely picture.

I followed the Seine for a bit then crossed one of the many bridges and searched for a place to eat. I found a lovely place called, “Las Antiquaries”. I enjoyed a breakfast set which consisted of a croissant, a small baguette with butter and a side of quince jam, eggs and bacon, fresh squeezed orange juice, and a cup of hot chocolate. Yeah…that sounds like a lot…and I ate it all…but I was starving. My eating has been all kinds of off since I left the States. I hung out at the cafe for another hour or so people watching and thinking about what I would do for the rest of the day. 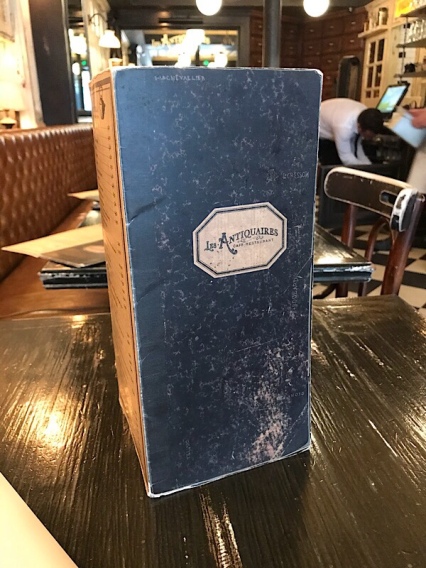 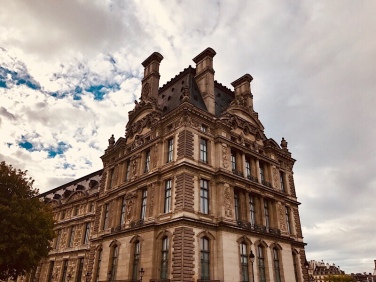 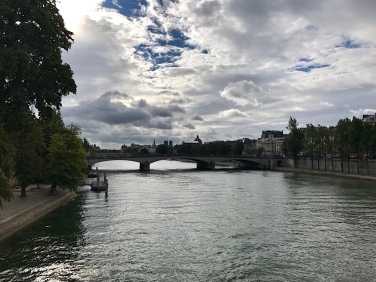 After I left it was more walking. I walked across another bridge and ended up at Notre Dame…totally not planned. And there was another insane line to get in…so admired the gothic cathedral from the outside and kept walking. 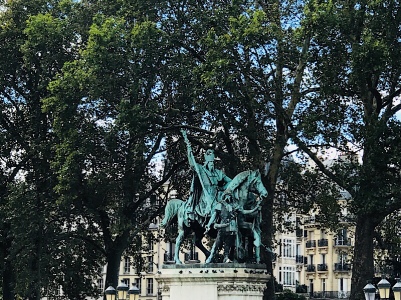 It was late afternoon at this point so I decided to rest a bit and headed back to my hotel. Fortunately, my room was ready so I was able to rest a bit and relax before I had my next plan of attack…which honestly…was just more walking. Though I didn’t have a plan I can say that I walked around the following areas on my first day 1, 2, 7, and 9th arrondissement.

I had a late dinner at Buvette Gastromique and it was heavenly. I had a lovely glass of wine as recommended by the waiter (I was pretty excited to exercise my French here) and the special terrine of the day. 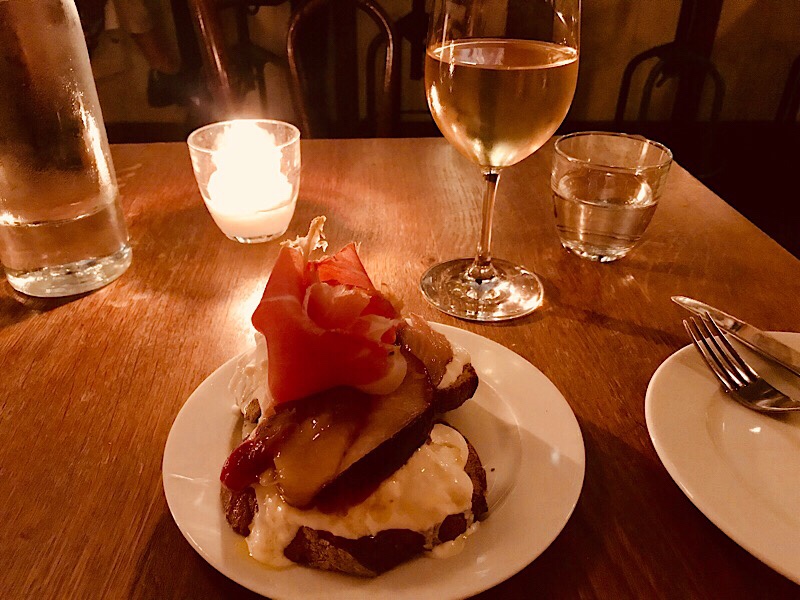 It was a wonderful way to end my first day in Paris…I walked 9 miles and went up 20 flights of stairs.

Woke up a bit later than I had planned. I purchased tickets to explore Versailles and headed off to catch the train. I decided to buy a full day pass today as it was more economical. The packet of tickets you buy at the station is only good for zones 1 and 2 and Versailles is in zone 4. The all-day ticket to Zone 4 costs 12.40 euros. Totally worth it.

It took a little over an hour to get to Versailles by train and I hadn’t eaten dinner yet so i wandered into a cafe, Le Lyautey and enjoyed a salad and a glass of orange juice.

I walked over to Versailles after…and it was incredibly lovely…from the outside. Though I had a ticket I had to get in this… 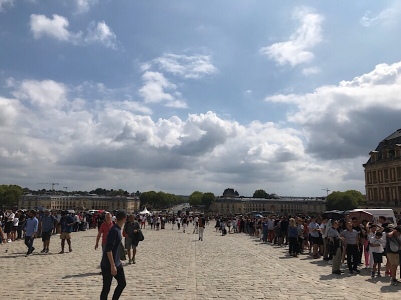 So you know..another laugh and I left. I did take some exterior photos, but not as lovely as I’m sure the inside is. 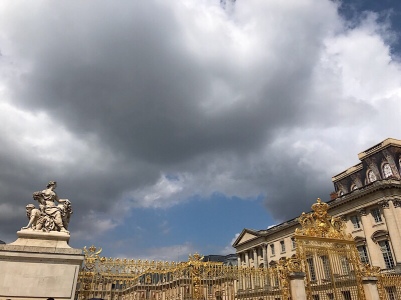 Yes, it took me an hour to get there, but standing in a line that was 6 rows deep was not my idea of a good time. I had to estimate that it would take about 2-3 hours just actually get into the palace and maybe an hour or so waiting to get into the gardens. I have limited time so this is not how I chose to spend my Tuesday. So I walked around the city area a bit and returned to Paris. I walked around a bit then decided to go grab dinner. I went to a place called, Le Comptoir de la Gastronmie. Even though I got there at 5:30 there was already a line so I stood in line waiting for about 25 minutes. Refer to my point number 10 above…many people make reservations ahead of time for good or popular restaurants; this was apparently one as the inside of the restaurant was completely booked.

An interesting thing about French restaurants…common items you can find is foie gras and duck. I didn’t want to eat something so rich and decadent so I ordered the cheese plate and the sea salted caramel creme brûlée and a glass of Sauternes…and OMG…it was amazing…almost as good as the glass of Sauternes I had from Chateau d’Yquem. (Speaking of…next time I will learn more French so I can travel out to that area to buy some wine)

I ended my night with…yeah…you guessed it…with more walking. I got off at Passy and walked across the bridge towards the Eiffel Tower. I couldn’t believe the number of people on the tour boats on the Seine! It was insane. I found a small, less populated area around the Seine where I sat and waited for it to get dark so I could catch the Eiffel Tower light show. I people watched and ended up chatting with a very nice Parisian woman who was also waiting to see the light show, apparently. We chatted for a good 30 minutes and she suggested I return to Paris in September or October when there are much fewer tourists.

Look at all these people: 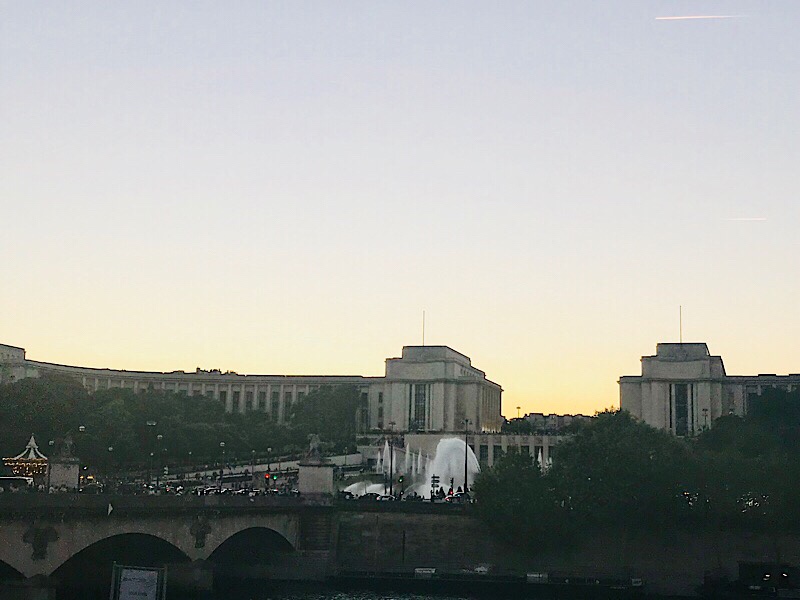 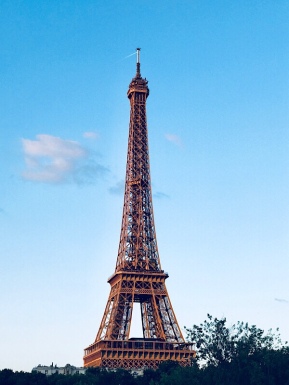 I ended my day by walking 8 miles and climbing 25 flights of stairs.

I had considered getting a good brunch, but I decided to go for a late lunch. I stumbled across an area that I suppose you could consider a “Japan/Korean town”. I stopped by a restaurant called, Hokkaido. I ordered a Shoyu ramen. Is it as good as ramen from Japan? No…but nowhere is, except for you know…Japan. It was good though. The broth was a bit lighter than I would have preferred, but it was delicious. I got the menu set which came with 5 gyozas and those were incredible.

You’ll be surprised that I took off to do more random walking. I ended up at the Opera House and what a lovely building. I couldn’t go inside, and this time it wasn’t because there were lines of people, but because they were shooting a movie there and that whole area was closed off. I walked and found the Musee of Parfum.

I…love…perfume. I had to go in…and I am so glad I did. The only souvenir I walked away with from Paris was the perfume I bought there. It is called Bella Cherie by Fragonard. The base notes are top to base, tangerine and star fruit. middle of jasmine, heliotrope and lily of the valley, base sandalwood, tonka bean, and vanilla. Fragonard isn’t as old as my favorite perfume maker, Floris, but it I enjoyed learning about the history and how they go about creating scents.

I found some random park and sat there and people watched and relaxed. At this point it was around 3:30 so I decided to return to my room and relax until I had to meet some friends for dinner at 7:30.

I met my friends for dinner and afterwards, we walked across the street and watched the sunset on the Seine. We walked along the river and watched people playing instruments, enjoying picnics, dancing, play with fire, you know…the usual. We hung around the Seine chatting and walking for a couple of hours then I returned to my hotel around 11.

I ended my day by walking 8 miles and climbing 16 flights of stairs.

I woke up SO LATE. I took a shower, checked out of my hotel and went to Gare de Lyon to catch the train to Barcelona. The nice thing I want to mention is as I was lifting/dragging my giant suitcase up the stairs…because you know…no elevator or stairs…a kind stranger lifted the back to help which I thought was incredibly kind.

My overall impression of Paris and its people? I love the vibe of the town. I understand why it is seen being a romantic one. I fell in love with Paris…I desire to learn the language and be fluent so that I can return and become more ingrained in the culture. The people were lovely and kind and were willing to help with my stumbling through the language.

Here’s a final photo of the countryside as my train traveled from Paris to Barcelona. 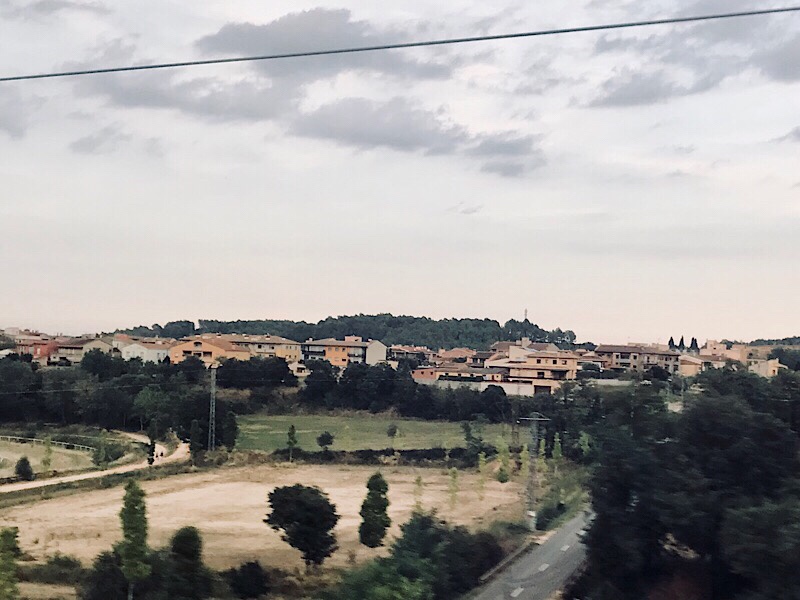