I landed in Haneda airport on December 10 around 14:03…firstly, thrilled that the flight landed so early, not thrilled that it took me almost an hour to get my bearings. And really, it’s my fault because I chose to do things kind of piecemeal. SO I’m here to help you. How do you NOT waste your time? Let me tell you:

By the time I was done with all of this I ended up at my hotel, Hearton Hotel around 16:30. As usual, I have no idea what I’m going to do while I’m here, but I figure I have at least 10 days to figure it out (much more time than when I was in Brussels) It’s a Saturday and the only thing I knew I would most likely be doing was going to a west coast swing dance that started around 19:00. After resting for a bit I decided to go explore and hopped on a train to the general vicinity of where I’d be spending my night time fun.

I ended up in Ginza and walked around. So…Tokyo is amazing…there are more people per square mile than in NYC, and yet it is cleaner?! I was so amazed…and people smoke around here and I didn’t see cigarette butts, trash, or anything, it’s crazy! And, there are so many vending machines…it’s crazy (Note* If the label for the drink is blue it is cold. If it’s red it will be warm)! You’ll never die of hunger or thirst (I mean, unless, the obvious, you don’t have cash)…not only are the streets clean, but so are all the train stations! I’m looking at the tracks and in NYC the tracks are gross, people just throw trash and whatever down there and nothing like that in Tokyo.

For my first day, I went to, and I’m not kidding a restaurant where I didn’t know the name, I ordered something and had no idea what it was, then I ate it…so yeah…that happened.

For my second day, I went to a restaurant called Sapporo Dominica Ginza for lunch where they sell curry soup, which is so freaking yummy! I ordered the original soup base with hamburger, spicy, and extra egg.

After brunch, I wandered around then found my way to Asakusa. I totally recommend going to Asakusa! If you are looking for a traditional style shopping and street food area, this is the place, more so than Ginza. As awesome as Ginza is, I’d rather spend every day in Asakusa over Ginza…I’m not a huge shopper so that doesn’t help. Also, if you weren’t aware, Tokyo is expensive. Like, really expensive…to be fair, I’m really cheap when I travel so most of my excursions are free or cost very little. I took a walk through some of the stores in Ginza and there was a scarf that was super cute that I wanted to buy, but I didn’t want to spend $99 for it. -_- A good way for a reality check if you are converting ¥ to $ take the yen amount and knock off the last two (essentially, multiple by 100).

For a snack, I went to a random cafe in Asakusa and ordered a mixed fruit parfait. 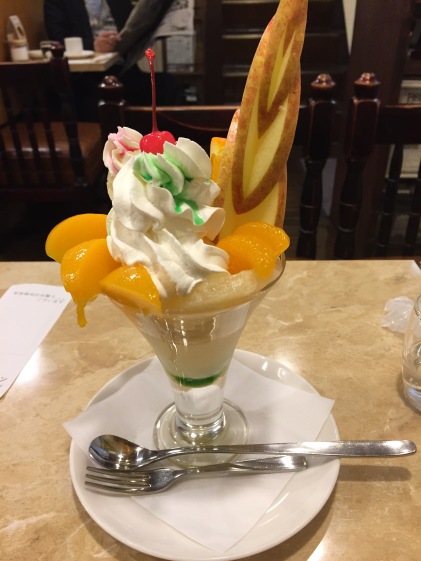 Then I walked around the market, which was awesome! And found my way to Senso-ji temple. 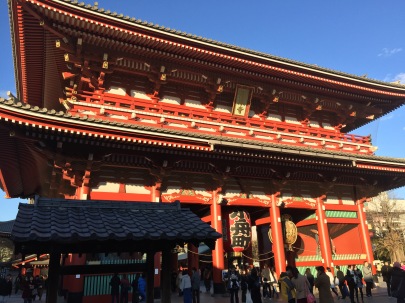 For dinner I went to Ippudo Ebisu, I’ve been to the Ippudo in NYC and it was maybe even more amazing here…haha… 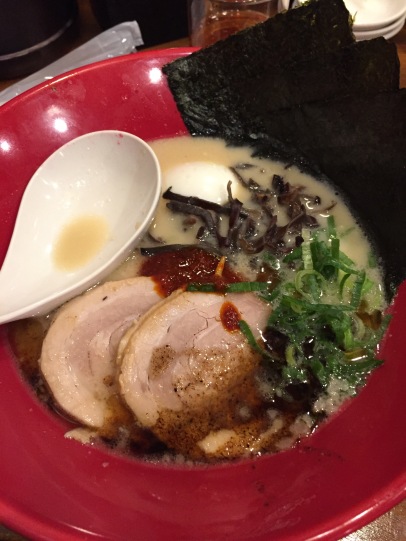 Then, I decided, “It’s still early, now what?” and ended up at Roppongi Hills and saw Tokyo Tower from there, it was very pretty! I will definitely make a point to go there during my stay. I’ll have to post a good picture of it later. I just realized that I left my HDMI cable (for my camera) at home 😦

So overall, I’m loving Japan. I want to come back for sure…I’m actually trying to figure out when I can come back for the Cherry Blossom festivals. Highlights:

More later; on to Kyoto!